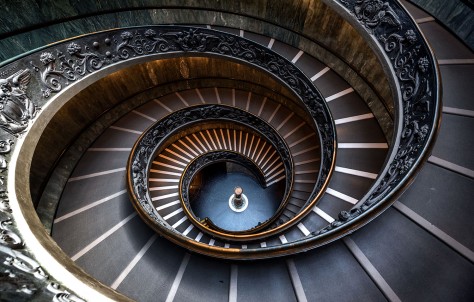 … one giant leap for his tango!

Today I had a 90-minute lesson with Bridgitta, in which I worked on the medio giro, then into a full giro.

Everyone told me that once you have one pivot, others become far easier – and they were absolutely right. Everyone also told me that from a medio giro to a full giro is really straightforward, and that too turned out to be the case …

Mariano, Maeve and Bridgitta all emphasised two keys. First, having my focus be on my follower’s movement rather than my own. Second, not worrying about my own steps. With these two things in mind, medio giros and giros lose all their intimidation factor.

Which is not to say I didn’t have things on which I needed to work. Bridgitta was great at making sure I had the basic movement then starting to layer in all the different things I needed to tweak. Starting with ensuring that my left shoulder really opened up to create the invitation to move into that space. Next, keeping the embrace close and connected throughout – introducing flexibility without losing connection. Keeping my head properly upright. Correcting a tendency for my elbow to get ahead of my shoulder …

Having worked on the medio giro in group classes, which tend to work in some mix of practice embrace and open embrace, it had felt like a movement which required some space. We’d gone into a closer version of the open embrace when I’d practiced it with Steph – but now Bridgitta had me do the whole thing in close embrace. It was actually far easier than I would have guessed to make that transition.

From medio giro to full giro was also easier than expected. Of course, I was working here with an experienced follower, but Bridgitta also leads, and is skilled at switching off the automatic corrections a good follower makes. She can have me feel what it should feel like when it’s working, but also take on the persona of a 1970s trade union rep on a work-to-rule, following only what I lead and not a millimetre more.

So Bridgitta, like Maeve, ran through the follower’s steps – side, back, side, forward – so that I would understand exactly what I needed to lead. Bridgitta started by calling out the steps, then had me do the same in my head.

The value of repetition was again apparent, as it felt more and more right the more times we did it. The mental voicing of ‘side, back, side, forward’ became more and more automatic. We’ll see if I can do it in a milonga – the acid test – but for now it feels comfortable.

Bridgitta also had me doing ochos in close embrace for the first time (I’d always opened the embrace somewhat when doing them previously). That was initially hilarious as I felt like I was back to square one after the weeks it took me to get the hang of an ocho in the first place, but it came together by the end. It’s a very different beast in close embrace, and it will require renewed practice, but it again felt like it was coming together.

Oh, and I practiced switching between inside and outside parallel walks, which felt less clumsy than it had when I was inadvertently doing it while attempting the cross-walk. So I’m also getting some variety in my walk as well as some new pivot-based movement. It’s really feeling like I’m building the components needed to dance.

Trying everything with Steph afterwards, it all worked – at least after I’d resolved my initial confusion over the entry to the ocho with the much smaller movements involved in close embrace.

Chatting afterwards, Bridgitta talked about the importance of mentally framing the work I’m doing now. Thinking of feedback less as correction and more as making my dance more beautiful and comfortable. That’s a good attitude to it.

Tomorrow is another lesson with Mariano. I’ll bring him up to speed and let him decide the most appropriate focus for the lesson. But I’m feeling like things are really starting to come together in my quest to have enough tools, and enough skill at using them, to dance in a way that feels fluid and varied.

The Eagle may not have landed, but it’s in close orbit and preparing for descent.

2 thoughts on “One small pivot for man …”