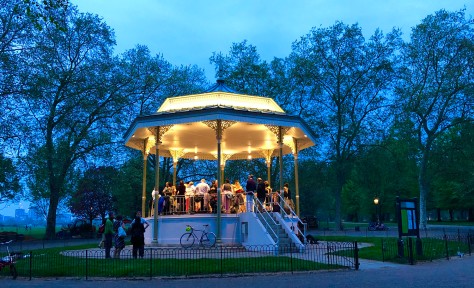 Warren Edwardes runs regular free milongas in the bandstand in Hyde Park. These are semi-official: held with permission, but without actually hiring the bandstand, so they rely on other park users cooperating. Normally, they also wouldn’t have the lighting, but the Royal Parks people kindly switched them on.

The space is small, and tonight was popular, so things were absolutely packed. Steph said it was almost like a Buenos Aires milonga. All of which left each couple dancing in about three square feet, leaving room for precisely one step forward and one side-step …

It was the ultimate test of dancing in small spaces, and I wasn’t at all sure I was up to the challenge. But the first tanda after we arrived was a milonga, so I ventured out with Steph. It was indeed challenging!

After the first dance, I came up with the idea of heading downstairs and round to ground level behind the bandstand, where we could still hear the speakers well, and that was more relaxed.

After a pleasant time chatting with friends on the grass, and drinking Prosecco, I decided there was only one way to find out whether I could actually dance tango in so small a space, so I dragged Steph back onto the floor.

The ronda was a little wild. In theory, there was an inner and outer lane, but some people were weaving between the two unpredictably. With so much attention needed on navigation, and so little space to work in, I wasn’t able to do much, so I was focusing on half-speed dance with suspensions, which helped.  However, Steph – and the Follower’s Liberation approach – came to the rescue.

I lead a circular ocho, and paused as Steph pivoted. Mostly because I was trying to figure out whether there was room to take one step forward. Steph took advantage of the moment to do some … advanced tango-ey stuff (I believe that’s the correct technical term). I followed her as best I could, and it all felt rather lovely. Plus, freed from the need to decide what to do, I was able to focus on navigation, simply leading forward steps as and when the ronda moved.

I decided to adopt this strategy for the rest of the tanda. Which was unfortunately rather abruptly ended mid-song by a follower in the inside lane doing a big boleo and catching Steph’s foot with her heel. It was a really stupid place to lead a boleo at all, and I was astonished that neither leader nor follower apologised, despite Steph’s yelp of pain making it very obvious what had happened. Though the couple in question were elderly, so perhaps they were deaf as well as blind …

That resulted in some unplanned time out, but we ran into Ray from Queer Tango and had an enjoyable chat with him and Simone, a woman I’d met on one of the anti-Brexit marches. (Not randomly: we were both part of a London tango contingent.) I told Ray how much I’d enjoyed the workshop and loved the relaxed atmosphere, and plan to attend their Monday night practicas once I complete the current Tango Space cycle.

Fortunately Steph felt ok to continue after a while, so we had one last tanda, this time me adopting the ‘pivot and pause’ approach from the start. Steph declared it laziness; I declared it making space for her to fully express herself in the dance.

My conclusion was that it would have been a very boring dance with a follower of my own level in such a crowded space, so I’m not sure I’d go to another unless I could get there very early. However, it was a special atmosphere, dancing in the open air, with tourists variously bemused or enchanted, so I’m very glad to have had the experience. Perhaps I’ll revisit another year when I have rather more skills to deploy in tiny spaces!

3 thoughts on “Dancing in three square feet in Hyde Park”