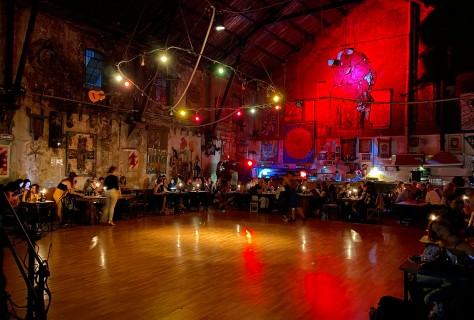 Steph’s original plan had been to attend a performance at La Catedral (above) at 9pm, eating there before dancing in the Milonga from 11pm.

I’d be back not long after eight, so the plan did seem feasible. However, a certain person was still lazing around in bed when it was time to leave, so we instead headed there for 11pm …

I first saw this venue in a performance video rather early on my tango journey, and have wanted to visit it ever since. Here’s how Wander Argentina describes it:

The unique space mixes the sacred aura of a cathedral and the cheerful bohemian clutter of a circus tent. The vibrant atmosphere features 12 meter high wooden ceilings decorated with large sculptures and hanging lights. In former incarnations the 1880 building was a grain silo, dairy factory and a refrigeration warehouse, before finally being converted into a cultural event space […]

Today La Catedral remains unlike any other tango venue in the capital: no two chairs or tables match, abstract artwork lines the walls, and a temporary exhibit is on display in the side room on the way to the restrooms. Above the bar hangs the four meter high ‘Corazon del Tango.’

Most of the artwork is by Bulacio, who studied art and architecture before turning towards music and tango. The resident cat, Tita weaves through the dancers, clearly used to the noise and the crowd.

Diego had warned us that it’s a place to eat and socialise rather than dance, and he was right. There were a lot of non-dancing tourists there to watch the show, but very few dancers indeed!

The good news was an empty floor. The bad news was we had one tanda with each other, and then each had a second tanda with one other person, and that exhausted the available supply of dancers.

It would be a fantastic place to go as a group. The (new) floor is amazing. The music is great. The environment is wow. And we could have the floor to ourselves. A plan for another time!

However, what La Catedral dancing lacked in quantity, it made up for in quality. Steph and I again had a really collaborative, dramatic dance. There was literally one other couple on the dance floor, and they didn’t dance the whole tanda, so we had the whole floor to play with. It was quite a dance, and we even got some applause at the end from the non-dancing tourists.

I went to get some water from the bar (table service at La Catedral appears to be a mostly theoretical concept), and when I came back Steph was dancing with the guy from the table next to us. I cabeceod his partner, and again had a really lovely tanda. 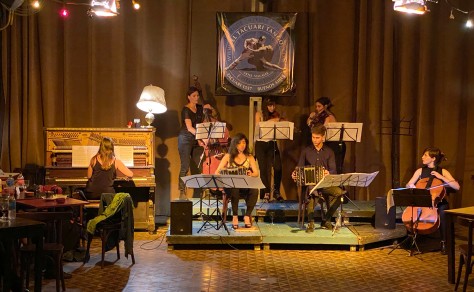 Approaching midnight, we headed over to El Tacuari, a small milonga in a restaurant. Our choice of venue was decided by two things.

First, the the friends Steph bumped into yesterday had a table booked for a small group of them. Second, there was live music by Las Malevas, an all-female band we like. (Though it had a male stand-in for one of the bandoneon players this evening.)

It was definitely a local affair, clearly attended mostly by regulars. Most people were just dancing with their own partner, so opportunities for dance were limited – especially as both Steph and another woman in the group were both nursing injured feet!

But I had one very nice tanda indeed with a local woman, and the rest of the time had a very enjoyable evening chatting, listening to the music, drinking fizzy wine and eating empanadas.

It’s not somewhere I’d recommend if you want to dance unless you’re taking one or more dance partners with you (ideally with functioning feet), but it’s a pleasant place to eat and drink. Not to mention fantastic value: the entire bill for a bottle of fizz, two bottles of water and two beef empanadas came to about £4.50!