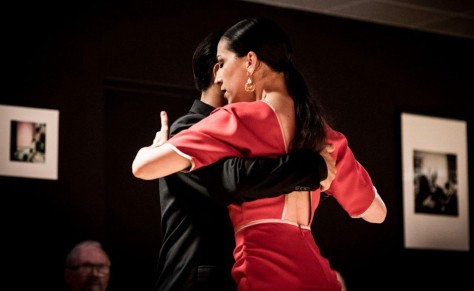 Meeting one’s heroes can be dangerous! I’ve long been an admirer of Adrian’s walk, having seen it in countless videos, so there is a certain risk involved in doing a workshop with him – but fortunately it was good!

While I love ochos and am now very much more confident with giros, walking remains my absolute favourite part of the dance. Some of my all-time favourite dances have been when there was room to walk, with a follower who enjoys it as much as I do. So a ‘Walking and Musicality’ workshop with Adrian and Amanda Costa was irresistible …

While the official topic may have been on the walk, much of the focus was on the embrace. Which is in no way a complaint: it was all really useful.

The workshop began on a somewhat controversial note: foot position! Adrian is a strong advocate of feet completely closed, heels and toes touching, when collected. This is in complete contrast to Fede, who argues fiercely for an open-toe position.

It’s not just a battle of style versus pragmatism: each has their own practical arguments. Fede’s view is that the open-toe position is more stable, making it easier to balance. Adrian’s argument is that closed feet doesn’t just look neater, it also makes it more likely you will walk in a truly straight line.

And, just to add to the fun, what I recall of Mariano’s approach is somewhere between the two – a somewhat open-toe position, but overlapping the feet a little, so you track tighter than would otherwise be the case with open toes.

I suspect Fede might win the argument by default, in that I’m not convinced my balance is fully up to the closed position. I did feel a little less stable, and also found that with closed feet you need to make weight changes a lot more obvious than is the case with the same follower in the open-toe position, because the side-to-side shift in the centre of gravity is much smaller. I did a tiny bit of following during the workshop, and I did struggle to detect weight changes, again with a partner I’ve successfully followed before.

I will, however, experiment with the closed position and see how it works out.

Adrian did have one tip on helping make weight changes clearer to the follower: to use your hand on her back to help signal them, with a kind of rocking motion – a little more pressure with the heel of the hand for leader right, and with the fingers for leader left. More on this shortly.

One area where Fede and Adrian are in complete (militant) agreement is ensuring that we are 100% square to our partner. Full frontal, as it were. No offset, no V-shape. Adrian had a couple of tips here.

First, make chest contact and turn our heads to the left before lifting the leader’s left/follower’s right hands. In that way, we can ensure that our hand position is compatible with that completely square position. They said if you join hands first, then if the hand position is too far forward or back, either leader or follower will experience discomfort in their shoulder, and the natural response to that is to bring the shoulder back, resulting in a V shape.

Second, get that side of the embrace sorted first. Because only when your torsos are aligned, and the your left/right hands comfortable can you determine the appropriate position for your other hand. With a very slim follower, it might be right the way around them, under their armpit. With a follower of average build, it might be mid-point. With a more rotund follower, not as far as that. Again, trying to reach too far around the follower will tend to distort the embrace.

This is an interesting one because I talked before about noting that local followers in BsAs tended to reach further around my shoulder, and then the natural matching hand position for me was further around her back. But I think that’s about the closeness of the embrace. In BsAs, a very close embrace is the norm, so that naturally means can each reach further; the above process still applies.

Walking is more than just forward, back, side

Adrian said walking was a broader category than we often think. For example, a weight-change is part of the walk. A side-step, of course, but also something for which I can’t remember their label: a forward step, not quite collecting and sweeping direct into a side-step in one movement. Oddly, I know I’ve done this before, when it worked fine, but today felt my lead was a little clunky.

Next came the same thing, but this time leading the step as a 90-degree turn. Stepping with the leader’s left foot, dissociate to the left and end the stop facing 90 degrees to the left. And the same thing in reverse with the right foot. ‘Easy to remember,’ said Adrian, ‘left step is a left turn, right foot a right turn.’

I struggled to lead that, and we didn’t do enough of it to get anywhere near good at it. But I did, I think, diagnose the issue. First, I wasn’t dissociating enough (act surprised!); second, I needed to begin the dissociation earlier. It’s no use doing it once the follower has begun her step, else I’m asking her to change direction in mid-step, which is never going to work. Instead, it needs to begin with dissociation, continuing it during the step.

I personally felt like the right foot sweep to collect on the right added an unnecessary complication: I’ll just try the 90-degree step-and-collect on its own.

Adrian did have a suggested ‘cheat’ to help signal the turn. Just as you can use your right hand to help amplify weight changes, you can do the same with pivots: use your hand to indicate the direction of a pivot in advance. The friend I worked with tells me this is also a somewhat controversial idea, and another says she hates it as it feels like being micromanaged.

Walking to the phrase

The musicality part of the workshop was very basic: just walking to the phrase (and half-phrase where there’s a pause in the middle).

There was one element that was at once useful and somewhat befuddling for my brain! They had us use a 10-step pattern to practice, which was:

That took a little getting used to anyway, because if you think of the 6-step milonga pattern, the right foot sweeps past the left, without a change of weight, so it was hard to remember that change of weight. But then he had us do this to the half-phrase …

Deliberately, because a pause every 4th beat in a 10-step pattern means the pause rotates so you do it in every part of the walk. So the pause might be on a side-step, forward-step, back-step or – and this is where my brain really struggled – change of weight!

When walking, I habitually use changes of weight to mark phrases or half-phrases. So in an unbroken 8-beat phrase: seven steps then a change of weight. But if you need to pause before the change of weight … my tango brain couldn’t really get the hang of that!

So combine my right-foot not wanting to collect and change weight on the right side-step, and neither feet understanding the idea of marking a pause by delaying the change of weight, and it was trickier than it sounds!

But that was the reason they had us doing it: Adrian said we develop habitual musicality patterns, and doing this exercise (enough times!) disrupts those habits, so we then have more flexibility and variety in our dance. I can definitely see that, though as I struggle less with musicality than technique, and dance more to the singer than to the beat, I don’t think it’s a high priority for my practice at this stage. One to file away for later.

Finally, we danced trying to use everything. All types of walking, those swooping 90-degree turns, both left and right in the line of dance, and to turn at the corners. Since I hadn’t really got the hang of those, it was all rather messy!

The things I found most useful were:

On that latter point, I do very often lead a tight circular walk without any trouble, so clearly I have the principle, it’s just implementing it in a neat 90-degree turn.

Next up: the Tango on the Thames milonga tomorrow, and I’ll probably do the pre-milonga class too.