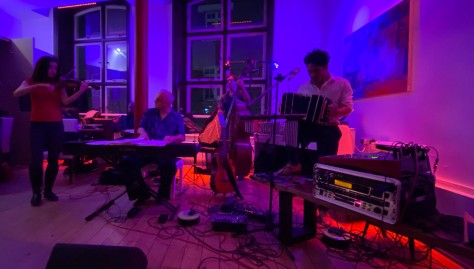 In Luis and Natalia’s intermediate class, we’d been playing with the contra-giro over the past few weeks, so they decided to do the same with the giro tonight. Or, more specifically, a medio-giro.

You can obviously enter a giro from any step – forward, backward or either side. The version I’ve used so far has been from a side-step, and the one we used tonight was from a back ocho. We played with a few different variants …

The detail of the leader’s steps for that is:

Another version is the same thing, but do a side-step between the follower’s feet as they do the forward step, for a sacada. The important things here are:

Another version is combining the two. So, the sacada and then the parada. With that version:

(There was another version too, but my brain was full by then.)

That combined sacada/parada version actually made a huge amount of sense, in that I could see how it could be a really smooth, flowing movement. It wasn’t after a few goes, of course – it was all very ragged. But I could see, if not feel, how it should all flow.

Doing any of this properly would require a huge amount of practice. I think this is where the lack of a dedicated (in both senses) practice partner really makes itself felt. I’d have to do these things a hundred times or more to start to get anywhere near being able to do them in a milonga. Doing it over and over and over and over again is the only way to acquire this kind of skill. Especially the sacada, where the timing really is split-second critical.

But for me the big take-out from the class was connecting some more dots. Seeing how options open up if I could reach the point of being able to lead a giro or medio-giro from any step. Seeing how a sacada could lead smoothly (ha!) into a parada. It’s all very theoretical right now, but it is helping shine a torch some way out into the darkness ahead.

And breathe! After feeling completely out of my depth at The Light yesterday, it was so good to return to a milonga where I feel totally at home.

Mostly, I Just Danced, and had a wonderful time doing it. Mostly with my usual followers, but had one very lovely tanda with a visiting one (she had moved out of London but tries to get back to Terra from time to time).

Usually with a new follower there’s a gradual process of settling into the dance together. I try to do the BsAs thing of settling into the embrace with just weight-changes. I would say ‘and then try to keep it simple,’ but that’s kind of a given with my dance! But I do avoid the movements with which I’m less confident.

However, some followers, you just click from the start. The best thing is dancing with my favourite followers, where we know from the start we’re going to enjoy it, but there is a special thrill in finding a new, very compatible follower. Those hand-squeezes at the end of each song, and the hug at the end.

With both her and my usual followers, I continued injecting the occasional ocho cortardo, cross, pivoting planeo, left-side sanguchito and contra-giro from the back ocho. None have yet reached the ‘core elements in my dance’ stage in the sense that I just find myself doing them without thinking. My balance in the left-side sanguchito still needs work – something I want to work on during Saturday’s practica*. The contra-giro is better but not 100% solid. The rest works; I think I just need to keep consciously incorporating them so they start to become habitual.

*I think I know what the issue is here. I think my tendency is to lose balance backwards, which means I need to give more of a push into the step. Will find out on Saturday if I’m right.

I did have one challenge! A friend has a foot injury, is ok walking, but not pivoting. Having an entirely linear dance to fast music is easy – I do that all the time with milonga – but doing so to slow music is more challenging. It was, though, very interesting. I found that a large, slow side-step can express quite well the type of music where I’d normally use ochos.

I also had one awkward moment. I was trying to cabeceo a follower at the end of the bar. We’ve danced together a couple of times, and it’s been great both times. I was about halfway down the bar and had to lean out slightly to try to catch her eye. She seemed to be looking at me, but didn’t either return my nod or look away, so I wasn’t 100% sure of the situation. I slowly walked toward her when a woman between us stepped out in front of me, made eye-contact and smiled.

It looked like she thought I’d been cabeceoing her, and I handled this in my usual smooth manner: standing there rather awkwardly trying to figure out what to do. It doesn’t happen often, but has now happened enough times that I have a theoretical plan:

I didn’t think this was deliberate, and it was someone I didn’t know, so I was about to go for option three, when she then walked away.

Steph thinks it was likely a mistake and she realised from my hesitation, so then pretended she’d just been smiling hello and was heading past me. I did, anyway, get the intended tanda, and it was very lovely!

Tomorrow, I have a practica and then a private, followed by Los Angelitos on Sunday.

(So much for the shorter blog posts, eh?)

2 thoughts on “Connecting some dots, and returning home to Tango Terra”