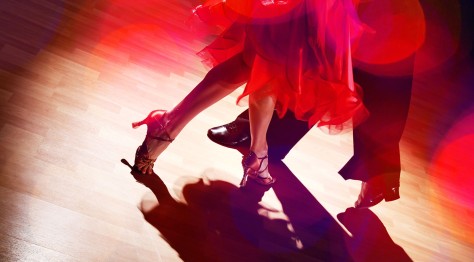 Monday saw our third lesson with David, again working on variations on things I already know.

The variation we did was actually simpler, at least in principle:

I’m guessing the ‘classic’ cross is taught first because you only have one thing at a time to think about, while this requires both the walk and dissociation/re-association to be more ingrained.

It was quickly working, though I again need to be clear about uncrossing the follower. Whether I can use it in dance is as yet unknown, but it’s a lovely option to have, and a more practical one in a crowded milonga.

One of the few solo exercises I’d done with any regularity was lapices, I think mostly because it was a new type of movement and helps my balance. Which came in handy when David introduced me to a leader planeo – following on from last week’s work (and this week’s recap) on the follower planeo.

That was great! I need to practice it, especially foot positioning, as my sandwich was ending up too deep – but that’s something I need to fix more generally, just using the front of our respective feet.

Again, the how, not the what

Finally, we worked on some simple ways to play with the music. David demonstrated some options, making it all look so effortless! He’s one of many teachers to emphasise that you can wow followers by doing the simplest of things not just musically, but with confidence, with drama, with passion, with verve. The how, not the what.

The good news for me is that the ‘what’ can be even simpler than my usual vocabulary. For example, a leader lapice. Which could be one, could be two, could be a smaller then larger one. David also used leg extensions without change of weight, something I used a lot in my very early days when I had literally nothing but the walk and side-steps, but since forgot all about. Another thing I have done in the past but since mostly neglected is a slow side-step, taking four or eight beats. Combined with really drawing myself up high to complete it, it can feel lovely.

I should have videoed his demo, as there were so many simple things combined beautifully. But this is something I can practice on my own.

One challenge with some of the smaller, more playful things is that fellow beginners can go onto auto-pilot, so it can be harder, for example, to lead the beginning of an ocho and then back than it is to lead a full ocho. But as I’m often fortunate enough to also dance with followers who are much more experienced than me, that sort of movement is a good thing to remember.

Speaking of passion, I’m not only getting new ideas from these lessons, but I’m also getting re-inspired.

I’m also feeling more optimistic about the tango future. Full-on pre-lockdown style milongas may be some way off yet, but there are signs of gradual progress. In various parts of Europe, there are lessons restarting with fixed couples, and there is now talk of the same in the UK. Some parts of Germany are now allowing change of partner, amusingly under an exemption for contact sports! There are also clearly informal arrangements here and there in London, people forming small bubbles to dance together without incident.

Following the scientific news also suggests that things are looking more hopeful than they once were. For example, there are people who came into close contact with COVID-19 patients, were themselves asymptomatic, tested negative for antibodies but have elevated T-cell activations (the body’s generic response to an infection). This suggests that it may be possible for people to be infected with COVID-19 and for the T-cells to successfully fight it off, with few specific antibodies generated. If this turns out to be widespread, then the population may be better protected than we’d previously thought. Progress on vaccinations also looks good.

So the dance will return, perhaps more swiftly than has so far been assumed.

One thought on “Variations and verve”