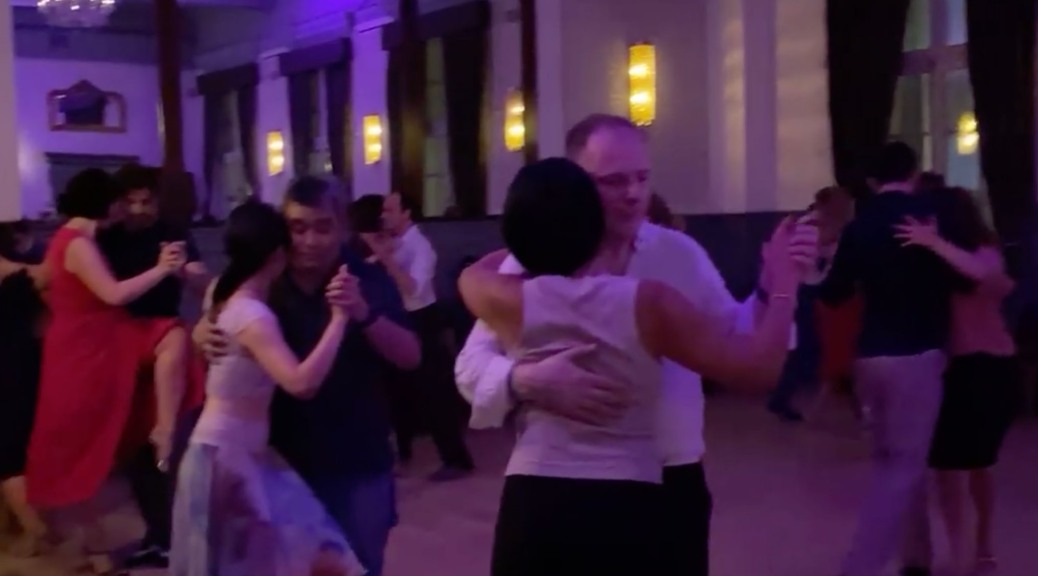 Tuesday night saw the first London milonga re-opening after 14 months of lockdown, one day after ‘freedom day’ in England and Wales. I was of course there, despite the 30C temperature!

Among the followers were some who had had just one or two tango lessons, in one case pre-lockdown! But it was a really interesting experience to lead complete beginners.

One of them was someone who didn’t know any tango, but danced salsa and some other dances. I was able to lead something approximating front ochos (though she did an extra step in them, something I remember seeing in another novice follower with a salsa background), but had no luck with back ochos.

I would have been content just to walk and do a few pivots, but it became clear that her dance experience did open up the possibility of leading more, so I gave an exaggerated lead for a back ocho, and it worked. That was satisfying, and brought a smile to her face.

We worked with the cross, direct from walking. I’m sure I must have been taught this before at some point, but I habitually lead the cross with a side-step start, so it was a useful reminder of this possibility.

The class was very sparsely attended, but thankfully more and more people arrived once the milonga got underway. It was so lovely to catch up with leaders and followers alike that I hadn’t seen for some time, in some cases since the beginning of lockdown!

The music was fantastic. The followers were a joy. The heat was manageable. The floorcraft was … not so great. I’d feared that more than a year with people either not dancing at all, or doing so only with partners and a friend or two, would have meant floorcraft skills had been forgotten, and that was indeed the case for some. There were a couple of dangerous leaders, leading spinning movements that were way too big for the crowded floor, as well as taking multiple back-steps.

That aside, I had such a good evening! I danced almost every tanda, and still didn’t have time to dance with every follower on my list.

I loved Diego’s DJing. Regular readers will know my strong preference for lyrical over rhythmical music – legato over staccato. But even the rhythmical tandas were lovely songs, with enough layers in them to dance to the melody as well as the beat. By the end of the evening, my only complaint was that 11pm came around way too soon!

Indeed, three of us were buzzing enough to attempt to find somewhere still serving drinks after 11pm – because there’s obviously only one thing to do after four hours of dancing tango, and that’s drink wine and talk tango.

We didn’t succeed in finding an open bar, but I dropped by home to assemble an impromptu picnic set, and Asia and I headed down to the river to polish off a bottle of Malbec between us. It took us until 3am.

I’ve been trying to persuade Steph that now is the perfect time to dive back into tango, just as everything is reopening and there’s a good opportunity to get known on the dance floor again after her time-out. I don’t think I’ve yet succeeded; we shall see.

As for me, Wednesday I have a private, then Tango Terra Thursday, theatre on Friday and Los Angelitos on Sunday – with maybe a practica on Saturday too, if common sense fails to prevail over enthusiasm …