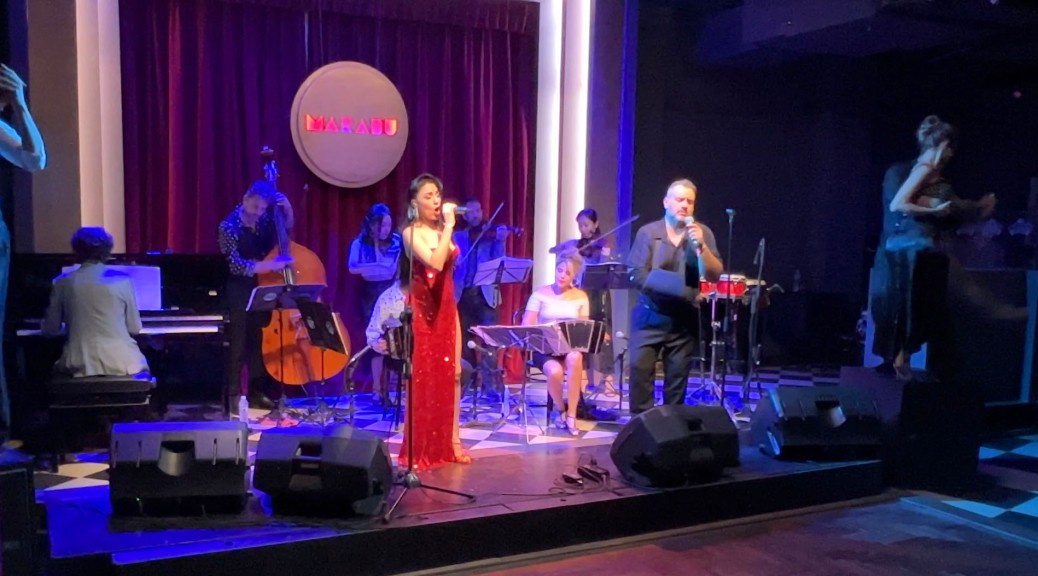 I’ve been here exactly once before, for all of a fortnight. But as absurd as it may sound, there really was a sense of returning to a second home. I suspect I’m not the only returning tanguero/a to experience this feeling.

Staying in an apartment rather than a hotel, and for a month rather than a fortnight, added to the sense of a being a very short-term resident rather than a holidaymaker. The tiny airport terminal, the traffic on the taxi ride into the city, our apartment on a familiar street just two blocks from the hotel at which I’d stayed last time – the sights and sounds of the city all had an easy familiarity to them …

We have a transient household in our two-bed apartment. I’m here for four weeks; Tina is here weeks one and two; Steph weeks two to four; Maria and Antonio weeks three and four.

Of course, one of the wonderful things about being in BsAs as a dancer is you don’t actually need to import friends – you will always find them there. On the plane, just two rows behind us, were the tango teachers Leandro and Maria, of Strictly fame.

Another friend, Terry, had arrived a few weeks earlier. Another, Rita, had arrived just ahead of us. Diego is here, and I’ve arranged an initial lesson with him, as well as Laura. In short, it was much the same experience as last time: there seem to be friends wherever we turn!

I’d used my only remaining pesos for the taxi, so first on the agenda was picking up cash via a now-familiar process. Use the Azimo app to send myself some cash, an 8-minute walk to the nearest Argenper branch to collect it, a bizarrely length collection process, which involved passing my passport back-and-forth multiple times, and him several times preparing to hand over the cash then needing to complete another few minutes of form. But eventually I walked out, AR$50,000 richer.

The SIM hunt was also familiar. Try various likely-looking places that couldn’t help, ask advice from likely-looking people (gadget shop staff and the like) and get directed to other places that couldn’t help. Eventually find a kiosk with a SIM supply but not much idea how to charge it. I settled, for the day, for a SIM without any credit, relying on plentiful wifi hotspots.

By this time, it was mid-afternoon and we were hungry! We’d had nothing to eat since a lacklustre BA breakfast at around 8am, so at around 3pm went in search of steaks the size of Uruguay. This proved trickier than expected, the local offerings looking rather touristy.

I finally hit on a solid plan. I would use my pidgin Spanish to seek advice from a guy in a posh-looking wine shop. If you appreciate good wine, the same is likely true of food, right? “Perdón, señor, yo quiero como carne muy bien.” Not the most grammatical of sentences, but it did the job! He pointed us to a restaurant on the next corner, and we ordered bife de lomo steaks which were, as advertised, both huge and melt-in-the-mouth delicious. I have never polished off such a huge steak in such a fast time. Tina, who is of elfine stature, was not far behind me.

We’ll gloss over the return visit to the wine shop to offer my thanks. Suffice it to say a certain amount of wine was drunk with the store owners and some passing Italian tourists, and I left minus £20 and plus a bottle of truly amazing Malbec.

After that, we returned to the apartment to do a bit of unpacking, charge a few hundred gadgets, shower, change, and drink some tea! That done, it was time for the short walk down our street to Marabú for a live performance by Romantica Milonguera. I’d initially had some difficulty booking tickets, the website turning up its nose at my filthy foreigner cards, but I eventually managed to persuade my Revolut card that I was really in Buenos Aires – something which ought not to have taken it by surprise since I last used it here.

Interestingly, the band’s main following in BsAs is not dancers, so this was a concert rather than a milonga. Since I’d by this time been awake for almost 48 hours straight (barring a little fitful sleep on the plane), and Tina similarly, we weren’t too disappointed by this.

We got a table close to the front for the first half, and then a front row table for the second half. The performance was absolutely stunning! Video will follow at some point.

A short walk back to the apartment, and straight to bed! I slept like a log for nine hours.