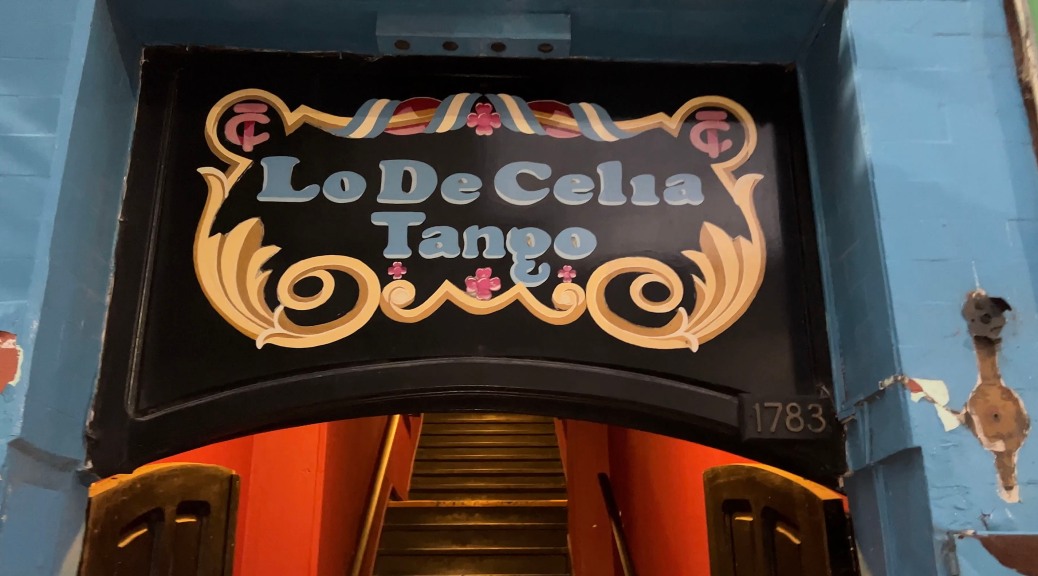 I’m now halfway through the three-week period in which I have to work as well as play, and I’ve more-or-less settled into a pattern:

Things like eating, shopping and laundry have to be slotted in here and there. Suffice it to say I’m eating a lot of empanadas. Whether this schedule is sustainable remains to be seen; so far, all I can really say is that I’m still alive.

A follower from yesterday had suggested El Maipú today. I’ll keep the milonga blogs short today as there’s a more general piece I want to write about dancing in BsAs …

Despite the milonga sharing the name of our street, it is in fact in the same place as the vast majority of milongas here: a 10-minute taxi ride from our apartment. It’s like any journey across central London – anywhere to anywhere takes 40 minutes.

As I walked in at around 7pm, I saw that my new friend had arrived literally 30 seconds ahead of me! After a hello hug, we made our way to the segregated seating. This was again set up for diagonal cabeceo, and again worked well. It was again an older demographic, and very similar in feel to Tango Camaro, albeit without quite the same atmosphere.

The music was biased toward the rhythmical, at least for the first few hours, but there wasn’t too much Biagi! Mostly the music was sufficiently layered to dance to different instruments, even if it was lacking in vocals.

I wanted to wait for the right music before cabeceoing yesterday’s follower, and sadly that didn’t happen. But this is again tango. I danced with a range of other followers in age groups ranging from 40-something to 70-ish. Nothing spectacular, but all very enjoyable.

There was another milonga with a live band, and I wanted to try that, so headed out at around 8.30pm to …

This was an afternoon milonga, running from 4pm to 10pm. There was no clue when the live band would be playing, and sadly it was over before I arrived. I had a rather confused Spanglish conversation with the guy at the ticket desk where he didn’t seem to want to sell me a ticket, but it turned out he was just warning me that the band had finished.

This is another traditional milonga, with segregated seating, this time at opposite sides of the room – but the long and relatively narrow layout meant this worked fine.

So far, the four of us been rather scattered in our various activities, with M&A more focused on classes at this stage, and Steph veering towards the younger, funkier milongas. So one drawback of the post-Tina phase of the trip is that followers can’t see me dance before I invite them. However, it only takes one follower to take a chance, and then I’m away.

My favourite follower was another very experienced dancer who took every opportunity offered to do her thing. I did a lot of pivoting while she did lots of back-and-forth double-time things around me!

The floor had really thinned out by the last hour, so I was also able to do some walking, which was great.