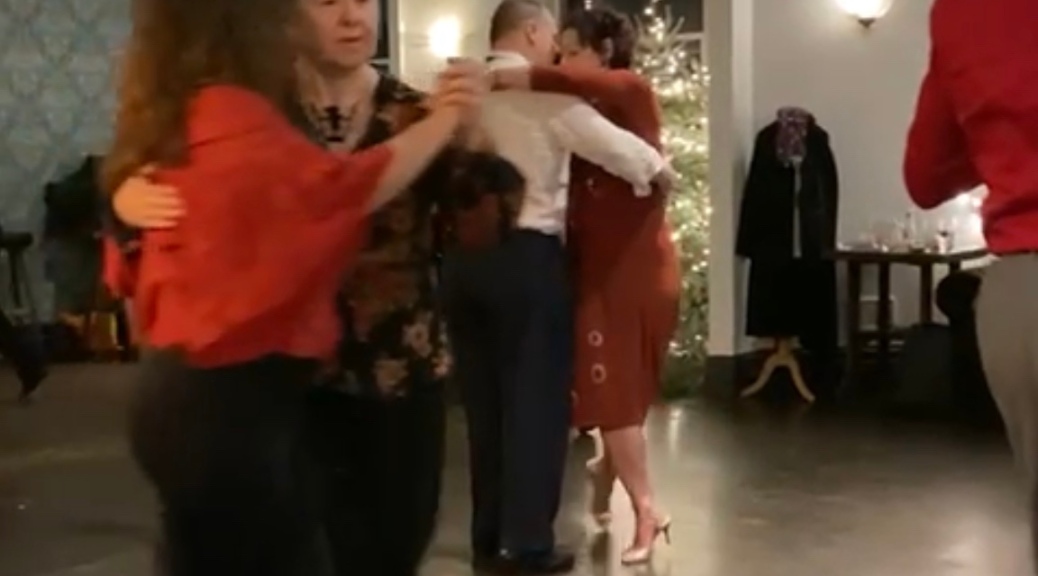 I thought I’d written a blog post about my previous visit to Etonathon, but if I did, WordPress search can’t find it. The executive summary is that I had a wonderful time, and added it to my ‘must go again’ list. So I did.

It was also telling that many of the familiar faces there were not from other London milongas, but rather The Feast and Tango by the Sea. Dancers had come from as far afield as Sheffield and Swansea.

I’m discovering that there’s a virtuous circle to the festival circuit: the more you go to, the more familiar faces you see. In addition to some guaranteed lovely dances, being seen dancing a lot also makes it really easy to get dances with new followers.

One of my favourite dancers from The Feast and TbtS was there. She leads as well as follows, and we always have really great, collaborative dances. In sections where she’s in charge, I usually have at least some idea of what we’re doing, but in one tanda with her, there came a point where my head had literally no clue, but my body seemed to get the idea ok. “You’re a good follower,” she said.

Another wonderful BsAs and festival effect is that I’m no longer afraid to cabeceo much more advanced followers because, well, that’s most of them. There came a point when Diego had told me it was time to do so, but there had still been limits to my ambitions. It was when I cabeceod a follower there I’d never seen before, and whose dancing was mesmerising, that I realised I’d finally reached the point of being unafraid to cabeceo anyone. She accepted with a smile, and the dance was amazing.

At festivals, what I’ve come to think of as ‘the advance cabeceo’ has become my usual way to find my next follower. By this, I mean those seated followers who watch my dancing as I pass them, and who make eye-contact and give a clear smile as I do. Essentially a cabeceo for a future tanda.

Now, for all I know, they do the same thing to every leader who passes them in the ronda, and there’s absolutely nothing personal about it! But the implication is that they like my dancing, so certainly it feels like a very flattering way to be asked, and totally works with me (well, if they remain sitting in the same place, so I don’t have to recognise their face out of context!).

The time flew by, and I again had an amazing time. Next year, I may book myself into a local hotel or apartment for the full five days. It’s that good.

Tango 178 had been on my to-do list forever, so when it was only one of two London milongas on new year’s eve, that seemed to be the tango gods’ way of telling me now was the time. Antonio and Maria were over from Italy, and Miriam from Hawaii, so following a lovely reunion lunch, they also joined me for the milonga, along with Alessandra.

178 had been recommended to me by two or three people, who’d told me I’d like it. They were right, but not for the reasons I expected.

Maybe NYE wasn’t typical, or maybe I’d misremembered what I was told, but I’d gotten the impression that it was a rather traditional milonga, tending toward an older demographic. The reality was much more like Tango Terra: super-friendly, great fun (thanks in no small part to a decent contingent from Queer Tango London), but very far from traditional!

The music was traditional tango music, but interestingly not always in single-orchestra tandas. I keep notes on DJs, so I know which ones are to my taste, and Amanda slotted into my ‘Arrive late, but arrive for sure’ category. Lots of rhythmical tandas early on, but hitting sustained Ben-approved levels of Pugliese and Troilo later on!

A standard question at festivals is, of course, ‘Where are you from?’ Answering ‘London’ to anyone from outside the capital tends to result in one of two of responses from followers.

To hear really amazing followers say that they sat all night is, to me, the saddest commentary on London tango. (The same thing can be true of great London followers, of course.)

I always recommend Tango Terra to those visiting London for the first time. I do warn them about the combat-zone level floorcraft, but tell them it’s the friendliest milonga in London. Everyone is happy to chat, and once you’ve got chatting, cabeceos will follow. I will now add Tango 178 to that visitor recommendation, for the same reason.

Let me give you the most wonderful example …

With apologies to my fellow, uh, fellows, in my view the best leader in the room by far was a woman I’d seen a few times before, but never spoken to. She clearly knows the music inside-out, and danced every note. (I won’t name her until I’ve had a chance to ask her if it’s ok.)

Alessandra really wanted to dance with her, but was feeling too shy to cabeceo her (a topic for the next blog post …). In most London milongas, I wouldn’t dream of doing what I did in this situation. I introduced myself to the leader in question, told her I loved her dancing, pointed out Alessandra as another fan, and started to say that I knew she would love to dance with her if at any poin–

I got no further. She immediately rushed over and invited Alessandra to dance. It was a truly heartwarming response.

A delicious surprise to end the evening

I’m old-school when it comes to cabeceo: if a follower wants to decline my invitation, I’m always appreciative of a textbook ‘no thank you’: making eye-contact to make it clear she’s seen my invitation, then looking away. Then I know it’s a no, and can move on.

Of course, that doesn’t necessarily tell the whole story. It may be a ‘not just at the moment’ (though there are ways to communicate that), or it may be ‘you jest – take ten more years of privates and then we’ll see.’ Either way, it’s clear for that occasion at least.

It’s trickier when it appears that a follower simply isn’t looking in the right direction to spot a cabeceo. That might be exactly what it appears, or it might be that she has caught it out of the corner of her eye and chosen not to look in my direction. In that situation, I take the view that two attempts in the course of an evening is fine, while three feels a little stalkeresque.

There was one follower there who I didn’t recognise, but really loved her dancing. My two cabeceo attempts both fell into the ‘not looking up/in my direction’ category, leaving me none the wiser, but I left it at that.

After the midnight Big Ben bells, the DJ played, um, well, school disco music. And salsa. Not being qualified in either, I was about to call it a night when Back to Black began playing. I’ve danced tango to that before, and it so happened the follower in question was walking toward me at the time. I raised an eyebrow, she nodded and we had a very fun dance. A great way to end the evening.