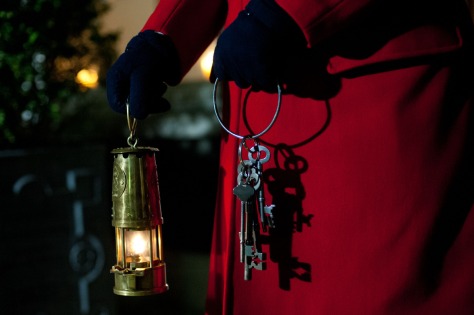 If I were in any doubt about my addiction to tango, this evening would have dispelled it. This was the first week since I started dancing in the milonga after the Tuesday class that I was unable to do so – and I really, really missed it …

I did have a good excuse.

I first attended the Ceremony of the Keys at the Tower of London about 25 years ago. For anyone unfamiliar, this is the nightly ritual of locking up the Tower for the night. It’s a ceremony that has been happening for 730 years, and members of the public can apply for free tickets to be inside the Tower to observe it. (It’s the main gates that are locked; you are let out afterwards through side-gates.)

Steph had never been, and it’s a rather special experience, so I decided to introduce her to it. But you have to book around a year in advance – which was six months before I took up tango. At the time, a Tuesday evening had seemed a safe bet. Now, however, it clashed with my second Tango Space evening of the week.

Fortunately, you don’t have to be at the Tower until 9.20pm, and we live very close to it, so I had time to do the improver’s class then nip home to drop off my backpack (none allowed in the Tower) before walking to the Tower. But I definitely felt milonga withdrawal symptoms …

The improver’s class, as yesterday, was on using the cross to change direction. I was pleased to find that, once again, I could count on Hamdi and Amy to teach a simpler version.

I was also very happy when Hamdi said he wasn’t happy with the quality of cross he was seeing as we practiced that prior to the changing direction movement, as that provided a prompt for more guidance and practice. A focus on quality of basics is another thing you can be confident on in the Tuesday class.

The actual changing direction part was very easy. It was simply the leader pivoting the follower slightly to her right to uncross her, then leading her to a forward step while the leader pivots, to face the desired direction.

The main trick here was not over-pivoting the follower into an ocho. One round, Amy came over to feedback that I was doing this because I was – no prizes for guessing – letting my arms get ahead of my chest. I need to give her the Julia tip: that a raised eyebrow would be sufficient reminder …

Hamdi is also very good at not teaching fixed sequences of steps. For this, he said it didn’t really matter what the leader does with their feet, it’s all about the chest.

Conversely, some very good followers made it clear when I wasn’t dissociating enough by not crossing unless I gave an unmistakeable lead. They are my favourite type of follower.

I explained that I had to leave before the milonga, and several of my regular followers expressed disappointment, which I’m taking to be a good sign …

One thought on “Milonga withdrawal symptoms”