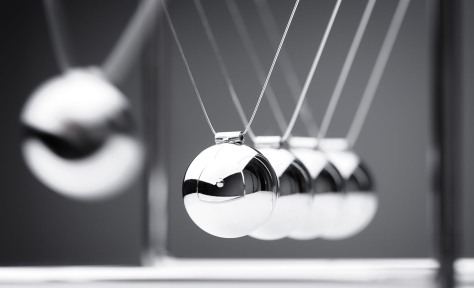 I signed-up for an interesting-looking workshop with a teacher about whom Steph seemed enthusiastic. I hadn’t made the connection, but this turned out to be because the teacher, Veronica Toumanova, was the author of Why Tango – and Steph knew I’d enjoyed the book.

The workshop was called Using momentum to lead and follow, and it started well …

After some warm-up movements – done, rather disconcertingly, in front of a mirror – we moved into the first momentum-related exercise. We had to imagine ourselves as a ball bearing on a tray being carried by someone who was trying to keep us in the centre, but we’d be rolling around to one side then tilted back to the other.

It was good fun, and after a while it turned into a kind of very gentle version of contact improv, where we could gently rebound off other people around us.

From there, we worked with a partner, imagining our arms as springs, taking it in turns to lead the other away and towards us, with an elastic feel at both ends. While Steph and I weren’t going to work together for the main parts of the workshop, we figured this one would be safe! It was fun.

Next, we walked on our own, playing with the idea of momentum, aiming to ensure that our chest was always moving forwards even when we were collecting our feet. After that, the goal was to pick times in the music to move from normal time into double-time for a few steps, then back to normal time. The aim was to have a smooth acceleration and deceleration.

Next, we did something similar to the contact-free leading exercise from Pepa’s workshop: contact-free walking. However, the twist was that the leader had to follow the follower. I enjoyed Pepa’s version, and enjoyed this every bit as much. The more we did it, the more confident I got, getting closer to my, uh, leading follower, until we were pretty much as close as we’d be in open embrace.

Next came something that would be a very definite first for me: leading double-time! It was essentially the same thing we’d done on our own, switching between normal time and double-time walking, but this time done with a partner – initially in open embrace. After that, we switched to close embrace.

Fortunately, the song was very carefully chosen, and it was very obvious when we should be doing double-time steps. I did this exercise with M2, who followed without any difficulty even when I varied it by continuing single-time though what could have been a double-time section (just to make sure I really was leading it). It was scary, and I felt I was better at signalling deceleration than acceleration, but it worked. I’m not sure I’d have the confidence to attempt it in a milonga, with a completely unprepared follower, but it was great to have experienced the ability to lead it.

Unfortunately, the workshop – for me, at any rate – went rather downhill from there. Veronica started teaching step sequences. The first of these was the first part of an ocho cortado, but instead of the return into the cross, the leader collects, does a back-step and then flows into a side-step.

To be fair, the movement did feel very nice, and it did make the point about using momentum, but it took me the whole of the first song just to get the hang of the steps. Not only that, but with a roomful of couples doing a U-shaped move, part of which was blind (the leader taking a back-step into an area we couldn’t see and straight into a side-step into an area we couldn’t see until the previous beat), it was very chaotic. There were a lot of collisions happening around the room, and I frequently had to abort the sequence to avoid one.

Then Veronica changed the sequence, and this time it was into a sacada with something and something. I never got as far as the something and something. I did eventually get as far as the sacada, and was – with the kind assistance of a succession of followers – able to then resolve it with a back ocho and carry on, but it was the usual step problem: so much concentration on the steps, there wasn’t much left for technique, which is a shame at the best of times, but particularly disappointing in a technique class.

Other followers told me I wasn’t alone in this: one told me that none of the leaders she worked with in that part of the class could actually lead the full sequence.

While I get the idea of a long sequence generating more opportunity to get a sense of how both leader and follower can play with momentum, I honestly think it would have been far better to do it with something everyone will know – and I think linked ocho cortados would have done the job perfectly, leaving us all free to focus on the feel rather than the steps.

However, the workshop was definitely still useful. I could at least get the principle of using momentum to effectively share the lead between leader and follower, and it was great to get my first taste of leading double-time.

The workshop then lead straight into a practica/milonga, from 8pm to 10.30pm. Tango Amistoso has a really nice approach to these, which is to label them as a practica, but use the milonga format – so it’s a very similar feel to the Tango Space milonga on a Tuesday.

One difference, as it is technically a practica, is that people may stop mid-song and have a discussion about what just happened – which adds another challenge for navigation!

I had a nice tango tanda with M1. She said afterwards she’d felt in her head, but it hadn’t seemed that way to me at all. It’s interesting the way we can sometimes have a particular perception of our own dancing, then when we mention it to our dance partner, they have no idea what we’re talking about. So many of our issues in tango are either imagined, or are about 5% of what we felt them to be.

Next up was a milonga, and I used my now-usual approach of inviting someone for the last song so my incredibly basic milonga dance doesn’t get boring, as I feel it would over three songs. It was a follower I didn’t know, and I warned her it would be uber-simple. “It’s just about having fun,” she replied. She turned out to be an excellent dancer who was doing some double-time movements to my single-time lead, all of which felt great.

I danced the next tanda with A, who said she wanted to practice her walk. That was fine with me, and I just did a combination of walking and ochos, throwing in one calesita. We had a very enjoyable tanda, and another soon after.

I’ve finally got the hang of paying attention to the T4T4M3T4T4V3 format (Tango x4, Tango x4, Milonga x3, Tango x4, Tango x4, Vals x3), so grabbed some water during the final tango song of the tanda and then started looking around for someone to cabeceo for the upcoming vals. I love vals.

I cabeceod M2 for this, and we again entertained ourselves by rating our song endings. The first one was so perfect I decided we should get double points. I knew exactly when it was coming, and led a circular ocho, then pivoted her back in front of me to end the final beat drawing her close. We had mixed scores for the others, but the dance felt great.

I socialised for a while, then heard Pugliese, whom I adore. I danced this tanda with A. The floor had thinned out a lot by this time, so I got to do a big walk to Gallo Ciego, which absolutely demands it!

I’m not normally good at remembering to use suspensions, but no problem with Pugliese! I felt like half the dance was suspensions. I also used plenty of ochos with paradas; it would have been rude not to. A said afterwards that she really liked that I’d given her time for her dance.

What was apparently less successful was my attempt to try out the main thing we’d done in my first musicality workshop: finding appropriate times to switch between dancing to the rhythm and the melody. I asked A for feedback afterwards and she said she’d felt there were times I wasn’t dancing to the music, which was exactly my fear about doing this – that it wouldn’t be clear to the follower what I was doing. I do need to do what I thought I’d need to do, and pre-warn followers.

Steph declared she was ready to leave, and I asked her to wait one last tanda as it was, to my surprise, another Pugliese. The room was almost empty by then. I went though to the kitchen area. Two followers were sat in bare feet, so were clearly done for the evening, which left A, who was just in the process of taking off her shoes. I gave her more of a pleading look than a cabeceo, and she put her shoes back on.

Or, as it turned out, one of them – the other was still partly undone. A shoe falling off during the dance was a first for both of us! That fixed, we continued our three-partner dance with Mr Pugliese, feeling very much like A was dancing with him every bit as much as I was. It was a great way to end the evening.

Overall, then, half the workshop was really good, with some valuable experiences from the second half too – and a really great time in the hybrid practica/milonga. I’ll definitely be going back there again. And tomorrow, a couple of hours at the Spitalfields milonga to look forward to!