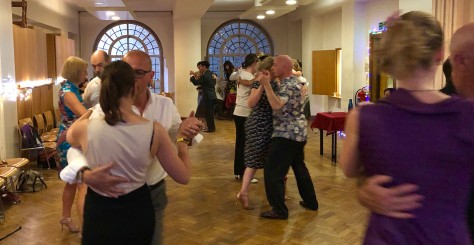 The previous blog post was a long one; this is short, just a fun time at a new-to-me milonga.

Last time I danced at St Columba’s Church in Chelsea, it was in the huge basement room with hundreds of people at the Romantica Milonguera live performance. Tonight, it was the more modest (but lovely) ground floor room for Dante’s milonga, Sans Souci …

It was a bit of a gamble, not knowing whether there would be any familiar faces. As it turned out, there mostly weren’t, but it still worked out well.

My first tanda was with a friend, always a relaxing way to start. Even better, we were there toward the end of the first hour, when the floor was still pretty empty, so there was room to walk.

S is very laid-back, so I decided to risk my first attempt at a barrida in a milonga, knowing she’d just laugh if it all went horribly wrong. That first attempt wasn’t successful, as I didn’t lead her far enough back to fully transfer her weight, and we did indeed laugh – but the second one worked.

Even more pleasingly, I was able to lead the leg sacada into a planeo. I’d had one experience of leading it with a follower who hadn’t done the lesson with me, but that was a practica with a friend who was aware of the lesson. This time it was in a milonga with someone who knew nothing about the lesson, and it still worked perfectly, so I was definitely chalking that up as a win.

The standard of dancing in the milonga was high, which can be intimidating for a dancer at my level, but it didn’t feel formal. There was plenty of laughter, so I felt comfortable risking some cabeceos with unknown followers.

The floor quickly grew busy, but not stupidly so – and the floorcraft was excellent, which makes a huge difference, as the ronda kept moving so there were regular chances to walk.

I danced about every third tanda. Some I missed because I couldn’t cabeceo a follower, others because the music didn’t appeal (or, in the case of the Troilo tanda, because I could make neither head nor tail of it). But at a milonga where I recognised only two or three followers, that seemed a decent hit-rate.

One thing I loved about Dante’s DJing: he played really good cortinas, and quite often people would dance to them. When he saw that happening, he played the whole song. I first discovered this when Steph was bopping to the cortina, and I joined in, thinking it would be for 30 seconds, and then had to continue dancing the whole song …

Most of my followers were clearly very experienced, with a lot of active following – dancers able to do impressive things from a simple lead. There was one time I inadvertently changed my follower’s weight when I hadn’t intended to, and ended up in cross system without realising it. I have no idea how, but instead of going crunch when I attempted to walk, she found a way to dance either side of my feet. I was wowed by that! That she’d spotted what had gone wrong and figured out a solution in the time it took me to project that first step.

I included at least one cross in most tandas, and can officially say my cross-phobia is cured. Insert peal of trumpets here!

I’d planned to dance the last tanda with Steph, but she’d been dancing almost non-stop with a friend who was staying with us for the weekend, and ended up with the beginning of a blister on her toe, so had to give up dancing about half an hour before the end. People usually dance the last tanda with their life-partner or a favourite dancer, so I thought I’d be sitting that one out, but there was a keen-looking follower still sitting when the first song began. I cabeceod her and we had a really lovely tanda. We felt very connected, so I even risked the walking turn I’d tried on Wednesday, and it worked.

Tomorrow is a private with Fede and Julia to try to crack the close-embrace giro, followed by outdoor dancing at Tango on the Thames/Queer Tango – should be fun!

2 thoughts on “Taking a chance at a new-to-me milonga: Sans Souci”