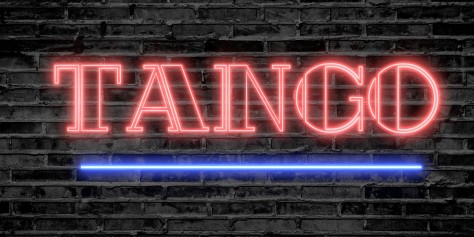 Signs you’re in a tango relationship #47: This conversation …

Steph: Your jacket has lipstick on it
Ben: Oh yes?
Steph: Yeah, you need to take it to the dry-cleaner …

There are those who might question my commitment to the left side of my ‘fewer classes, more dance’ equation. And technically it is true that I’ve been doing four group lessons a week, with Juan Martin and Steffie – but that ends soon, and the plan after that is just one lesson a week.

But I don’t think anyone can query the right-hand side of the equation. Tonight was my fourth milonga in as many nights. I was feeling tired, but hadn’t been able to make the last couple of Tuesday milongas – my father visiting one week, and a night kayak trip the other – so didn’t want to miss a third one. I will, though, keep the blog post brief so I can get to bed!

It was again very hot, and tonight we were without AC, so my plan was to stay only one hour – but apparently it takes two to tango.

I normally avoid the first tanda after the intermediate class as the floor is very crowded. But tonight I told Asia I felt like I finally had the tools to cope; she told me that was a rubbish cabeceo …

Of course, the one time I felt able to cope with a crowded floor turned out to be the only first tanda I’ve ever seen there where the floor was half empty! Lots of people on holiday, and I suspect many of the rest were deterred by the heat. So that first tanda did in fact give lots of opportunity to walk.

Tiredness was definitely catching up with me, so I only danced I think five tandas. I did manage to tone down the giros tonight, at one point making it through an entire minute of dance without one.

I wasn’t feeling as on form as I’d been yesterday. Nothing bad or anything, just a few more mistakes. Or perhaps it’s just that now the initial excitement of being able to lead giros is dying down a little, I’m more conscious of the shortcomings in my technique. Either way, I shall be making giros the focus of my solo technique practice this week.

During a milonga tanda, I did my usual ‘cabeceo someone for the third song’ thing. It was a follower I didn’t know, and as we walked out onto the floor, we had the following exchange:

Her: I warn you, I’m not very good at milonga
Me: Me neither, that’s why I waited until the third song
Her: Ok, then

I keep a fan in my back pocket for use during the gaps between songs. I think all my followers expressed appreciation for this; I’m in fact beginning to suspect that’s half the reason I get dances.

I’m skipping tomorrow’s Juan Martin & Steffie class, as I really need an early night! So my next tango outing will be their vals class on Sunday, followed by the Los Angelitos milonga. In the meantime, a night off and some sleeeeeeep.