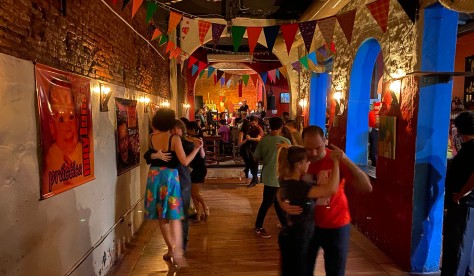 Today was a fairly thorough introduction to Buenos Aires. In particular, how Argentine time works.

Our plan was to attend a class, an afternoon milonga, another class and an evening milonga. We only managed the latter two – mostly because we spent a great deal of time getting our hands on some cash …

Cash is king here, but cash machines aren’t. They tend to charge quite high fees for foreign cards, and the bank exchange rate also isn’t fantastic.

Steph had a solution to this, in the form of the Azimo app. You transfer sterling to them, and they make it available for pickup in the currency of your choice at the location of your choice – and you pretty much get the interbank rate, with zero fees.

Once we had some money, I wanted to spend a bit of it on a local SIM. This, in Argentina, turns out to be a five-step process:

Five pairs of tango trousers and a bespoke suit

Yeah, so the day wasn’t entirely wasted on admin …

We did a bit of shopping. I started out with five pairs of tango trousers from a shop recommended by Fede (and who asked me to pick up a couple of pairs for him at the same time). In the UK, they cost £120 per pair; here, £25 – so five pairs for a fiver more than one pair in London. They are taking them up to the correct length, so I collect those on Thursday.

I then visited a tailor who’d been recommended to me, and after seeing the fantastic quality of his work, ended up ordering … a bespoke Solbiati linen suit with two pairs of tango-cut trousers. This cost rather more, but still around a third of the price I’d pay in London. I did fail to properly brief my beautiful interpreter to tell him we were only here for one week, so the timings are a bit worryingly tight, with the first fitting two days before we leave, and the final fitting the day before. But he assures me the dates are set in stone.

Steph’s total purchases for the day amounted to a three-quid pair of scissors.

The hunt for empanadas

We found one place where the guy on the door touting for business assured us they had them. He let us sit, order drinks and choose our empanadas from the menu. Only then did he reveal that no, they didn’t have any, except for the cheese and ham ones.

We paid for the drinks and left, wandered some more and eventually had to seek police assistance (it was an emergency after all). They pointed us to a restaurant where we had a nice ham and cheese one but a wonderful beef one. Or two. The reviews say the steaks are also great there, so we will return!

Diego recommended this one, describing it as ‘underground, very left wing.’ It’s a little way outside the centre in what I gather was once a rather rough area, but we were told is quite safe now.

It was an extremely welcoming environment. We were greeted with hugs by the two hosts, and then shown to a table. We’d worried that we were cutting it very fine for the 8pm start of the 90-minute pre-milonga class. We needn’t have: it was very much running on Argentine time. It actually began at around 8.45pm.

On each table is a ‘manifesto’ for the milonga. A rough translation:

Women also invite, and role-swapping welcomed. No cortinas, no drama, start and finish dancing when you like.

The class was excellent! The dance floor was pretty small, and there were a lot of people in the class, so it was good practice for the milonga which followed.

There was a step sequence, but a rather simple one:

I’m rubbish at leading the change between slow and fast steps, but it was at least no problem when my followers also knew what we were doing. Later, they had us mix four things:

I won’t say that any of my leading was pretty when it came to these changes, but it did work better than I’d expected. No feet were trodden on.

I also did a little following with one woman. I’m a rubbish follower, but she did manage to lead me through some of the above changes.

What I loved about the class was they emphasised the music throughout. Well, actually, the first thing I loved about the class was the music! It was Romantica Milonguera. But then the way the teachers continually referenced it. They had us listen for when would make sense to use the syncopated steps, and how we could ensure we were dancing to the melody as well as the beat. They also placed great emphasis on pauses, which Aurora – the female teacher – said were often the most interesting part of the dance.

There were students from all around the world – including, as it turned out, a fellow Tango Space one!

The class was mostly in Spanish, with some of it translated into English. I was surprised how little it mattered whether they translated: a good 85% of the meaning was conveyed by the movements and the ‘whooshing’ sound effects they made to draw attention to slow and fast sections.

This was followed by the milonga. The floor was pretty crowded during the class. Afterwards, it started empty for about the first 20 minutes or so – when I took the above photo. After that, it got increasingly crowded, and was eventually crazily so.

I danced the first tanda with Steph, while the floor was empty. The first song, I kept it simple; the second song, added giros and contra-giros; the third song I asked her if she was game for freeform tango, and she gave the go-ahead, saying it was the only kind she ever led. I wouldn’t say it was all smooth, but it did essentially work. I’m not ready yet to try that with an unfamiliar dancer, but I will test it with some friends on my return.

I only danced three other tandas-that-weren’t during the course of the evening, mostly because I was too scared to risk dancing with an unfamiliar follower on a very crowded floor. Every now and then more people would leave the floor than join it, and that was when I took my opportunities.

One dance was particularly lovely. The floor was busy but not crazy, and my follower did really beautiful ochos and paradas. That was pretty much all I led apart from a few giros when there was room and one cross on the only occasion there was enough space in front of us! I didn’t keep track of how many songs we danced, but it was rather a lot, and all to gorgeous music.

The low point of the evening was one completely out-of-control leader who kept taking multiple back-steps and moving between the ronda and the centre of the room and back. He also kept leading fast giros where he didn’t have control of the centre of them, so he wandered in a random direction during them, and managed to hit both me and several other people, mostly with his elbows. I had to abandon my dance as we were behind him and I was spending all my time trying to protect my follower from him. His follower at the time was … Steph! She had her eyes closed and was completely oblivious to all this.

I had a word in her ear, literally, and she then danced with her eyes open, but from what I could see it didn’t really help. He hit at least two other people after that, one of them a leader who made a comment in Spanish I didn’t understand, but the tone and facial expression were perfectly clear.

I almost didn’t dance any more, but then decided I wasn’t going to let that be the note on which the evening ended, so took a chance and cabeceod someone I hadn’t danced with in the class. She was a very active follower, and that helped hugely in the by now very crowded conditions, as she knew what she wanted to do and how to do it in the space. That was a much better ending to the evening!

Maybe it’s just the romance of being in Buenos Aires, but I did get a sense that the quality of the embrace was far more important, and it didn’t feel at all weird here to spend some time settling into it with only some weight changes. All my dances were very close embrace, except for one follower who covered a mistake I made by opening the embrace and doing … I’m not sure what! But it looked impressive and I just followed her as best I could until she returned to close embrace.

I feel perhaps 10% more comfortable now in a crowded milonga, so at this rate I should be 100% comfortable before we leave. That’s how it works, right?

Tomorrow (well, today) I need to go get rather a lot more cash to pay my tailor, then we have two morning classes at the school Steph likes, Escual el Mundial de Tango. We did visit DNI, but their classes are afternoon only, so clash with milongas. I’ll see how I get on at EeMdT. We also enquired about private lessons with the teachers from Muy Lunes. All teachers bar the internationally-known ones seem to charge roughly the same, which is the equivalent of about £27/hour. So one potential plan is to attend pre-milonga classes only, as a way to meet followers, and do one private a day in the morning. Watch this space!