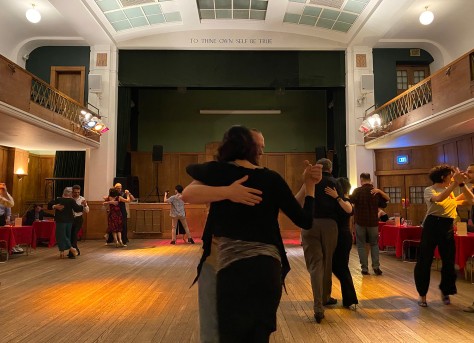 My planned exploration of new-to-me London milongas hadn’t got very far, albeit for the best of reasons: finding one I adore.

But I was curious to try Carablanca because it seems to be a Marmite milonga. I’ve heard reports from those who love it and those who hate it, but rarely anything in between …

I didn’t quite fall into either category. My view was more: Meh.

I should make clear here that I’m not in any way criticising the milonga: this is all about whether it’s a good match for me. Steph was having a fantastic time, and plans to go again next time. I, on the other hand, probably won’t go again.

There were a few positives, starting with the layout. With tables around the outside, it was the closest thing I’ve seen in London to a Buenos Aires milonga. You could have a relaxed evening here with friends, dancing when you wanted to, chatting when you didn’t.

Especially as the sound system is superb: plenty of volume on the pista, but still able to talk at the tables. That’s a really difficult trick to pull off, so I doff my hat to whoever is in charge of sound there.

And there are empanadas! Extremely good ones too. That’s something I’ve really missed about Buenos Aires milongas!

But … there was literally nothing I wanted to dance to in the first 90 minutes. It was just non-stop faster rhythmical music without a single slower lyrical tanda.

I do you get that you will typically have more rhythmical music earlier in the evening, and more lyrical songs later on, but to have a tsunami of rhythmical music with no lyrical relief whatsoever in an hour and a half seems excessive.

The second issue for me is that Carablanca seems to be its own crowd. I haven’t been to that many London milongas yet, but of the ones I have – Tango Space, Tango Garden, Tango Terra, Los Angelitos, Sans Souci, Spitalfields, Tango on the Thames, the Clore Ballroom, 3D, Etnia – there are always some familiar faces among the milongas. But that wasn’t the case tonight. Not a single one of my regular followers were there.

That may not have been a problem. I wasn’t cabeceoing anyone as the music didn’t appeal, and it’s likely that I could have found new followers there. Etnia has been the only milonga I’ve been to where I couldn’t get dances except with Steph and a friend. But much as it’s great to discover new followers, it’s lots of fun to dance with my favourite ones, so a milonga without any of them (except the one I took with me!) is definitely lacking a key element.

The other huge issue for me with Carablanca is that I understand they have a different DJ every week (or every fortnight as it is now). So unless you know the DJ, there’s no way to tell what kind of music you’re going to get. For me, the whole point is finding milongas that play my kind of music, which will in turn attract followers who like my kind of dance. With a random DJ every week, that approach isn’t going to work.

So, I danced exactly twice, both times with Steph. The first time was the last song of a tanda just as we arrived. The second time was an okay-ish tanda just before I left, on the basis that it was at least feasible to dance more slowly to it.

Were it just me, I’d heed the words at the top of the photo, consider I’d ticked the Carablanca box and leave it at that. But Steph had a really good time, and plans to go again, so there’s an outside chance I’ll go late, in the last hour or so, in the hope of more lyrical music. But I wouldn’t put any money on it.

Still, I’m glad to have tried it. And I must find out where they buy their empanadas!

2 thoughts on “My first visit to Carablanca, and probably my last”