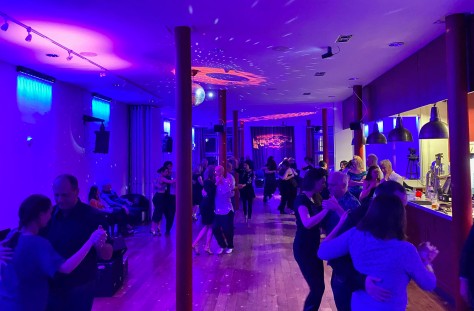 I learned my lesson from last time: namely that there is no point being there at 3.30pm when the milonga officially starts.

It began last time at around 4.20pm. I did enjoy socialising beforehand, though, so decided a 4pm-ish arrival would be about right …

That is indeed the case if you want to chat, while 4.30pm would be the target time if you just want to get straight into dance. Unless, of course, you’re arriving with a follower – when 4pm would give you a good 30 minutes of empty floor in which to walk to your heart’s content!

I’d found last time that the Sunday crowd was quite distinct from the Thursday evening one, though with some overlap, and that was again the case. But I like that, as it means I’m broadening my circle of followers.

Lady Tango worried me for a while

Every tango dancer alive knows how fickle Lady Tango can be. One day, everything is working; another day, nothing.

I can’t remember the last time I had a Tango Crash. A blog search suggests it was almost a year ago, which scarcely seems credible. Probably the reality is that there was so much hell in the first six months that it had to be completely catastrophic to stand out.

I do have this constant low-level background worry that my tango high has lasted so long that it has to be illegal, and must surely be close to the point where it begins to defy the laws of physics. That a Tango Crash with my name on it has to be lurking out there somewhere, waiting until it has lulled me into a false sense of security before pouncing.

I wondered for a little while if perhaps today was the day. I usually adore almost all the music at Tango Terra, but today wasn’t really feeling it for about the first hour. And when I did dance, I wasn’t feeling inspired.

But something finally clicked into place, and from that point on, I had a great time as usual with old and new followers alike.

Fede and Julia had set me two pieces of milonga homework after yesterday’s private: use pauses to do a posture and head position check; and ensure I was bringing my left shoulder far enough around in back ochos.

I think both were successful – and have some evidence for this. There’s a lady of a certain age who has taken me under her wing. She asked me last time if I wanted any feedback and I said I’d welcome it. She said I needed more dissociation in my back ochos.

This time she declared there was a huge improvement, and said she would prove it by having me lead her with no arms. We did this for a song and it worked perfectly. I even tried leading a couple of giros; the first one failed but the second worked.

I also checked whether I could feel any pressure against the side of my head. I couldn’t, except with one follower. My head position seemed ok, so I checked with her. She said all was good, and it seemed it was a preference on her part to have firm head contact. That felt fine to me once I was satisfied it wasn’t my head in the wrong position.

As always, I danced right until the last song. The second moment: I’d had a lovely tanda with a follower I’d met that night, and we danced a second one later. “It’s great when you dance with someone new and feel instantly connected to them,” she told me as we walked off the floor. The perfect ending to my tango week.