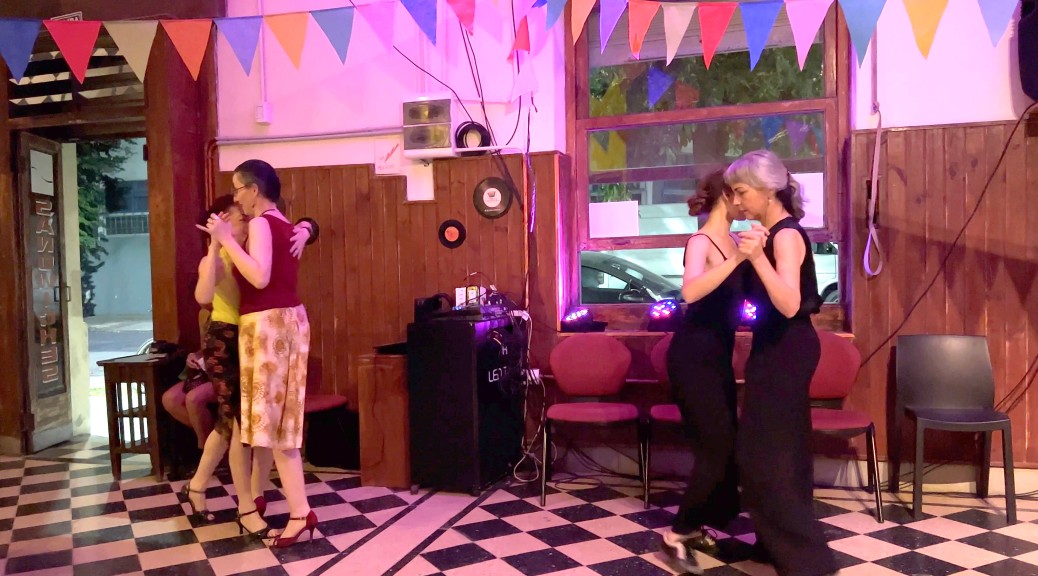 Getting up at 6.30am was a severe shock to my system, despite being good and going to bed before midnight. I did survive working for a living, but was very tired afterwards. I’d never previously mastered the art of the afternoon nap, but this time I went straight to bed and was asleep in minutes.

While I slept, Steph and Tina were somewhat busy …

Steph has said before that Comme il Faut shoes are very pretty, but not great quality. When I questioned why she had returned with two pairs of CiF among her haul, she replied “They are sooooooo pretty.” Ok, then. Between there and Flabella, the two of them returned with a total of nine pairs of shoes. As you do.

As I have to get up at 6.30am every weekday for the rest of the trip, I’ve set myself an 11pm curfew so that there is some hope of me making it through the next three weeks alive. This generally means going to the ‘afternoon’ milongas. However, Steph wanted to go to Cafetin del Almagro to meet an old friend and dance to a live band. I decided to come along for the first couple of hours.

We arrived at 9pm, just as the pre-milonga lesson was ending. It’s a small place, a cafe by day, as the name implies. The floor is … interesting, with a huge dip in one section, but the atmosphere is good, and the people friendly. We got the best table in the place, and waited for the milonga to start.

When it finally did, it was still very quiet – and the music was not to my taste. This turned into a repeat of the first two hours of Club Gricel, where it was non-stop rhythmical music. I’m now wondering whether DJs aim to balance out the more lyrical music typically played by live orchestras?

Eventually, I decided there was no choice, and danced a rhythmical tanda with Tina, and later another with Steph. These were fun, but I wasn’t overly enthusiastic about cabeceoing anyone else until there was music which inspired me.

Which hadn’t happened by the time 11pm rolled around. And as the closest we’d got to the live band playing was a cello player arriving, and one of the organisers fiddling with a mic stand, it appeared it would be well past my curfew before they played. I grabbed a taxi, having attended Cafetin del Almagro Light.

Ah well – they can’t all be Salon Canning at 4am!